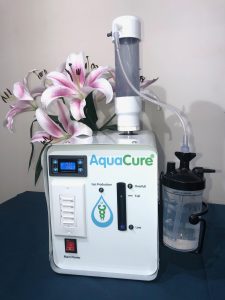 For everyone who desires to experience the benefits of HydrOxy for the first time, and for everyone who have a HydrOxy generator at home and desire to have access to one while visiting Sedona.

HydrOxy is a gaseous mixture of Hydrogen, Oxygen & ExW (electrically expanded water)… The key nutrients for all ‘water based’ life.

Doctors do not heal or cure any disease. The BEST they can do is help the body heal itself.

HydrOxy contains a trifecta of nutrients the body NEEDS to heal.

The AquaCure is a practical, reliable and versatile HydrOxy electrolyzer (generator) that is safety certified.

Here are SOME of the DOZENS of benefits that have been discovered by people using HydrOxy.

About 86% of a human is made of Hydrogen and Oxygen (62% + 24%).
HydrOxy is a special mixture of Hydrogen, Oxygen and ExW (ExW is a ‘plasma’ form of water that provides bio-available electrons). This trifecta of essential nutrients supports the regenerative processes that are vital to all ‘water based’ living systems (plants, fish, mammals… including humans).
Why the HydrOxy works:
The AquaCure machine generates a high energy bio-available gas called HydrOxy (aka Brown’s Gas, BG, HHO or OxyHydrogen); that our bodies need to heal (from disease and wounds) prevent & reverse the symptoms of aging.

HydrOxy travels in your blood into every cell for  nutrition & relief of issues related to dehydration (literally meaning ‘lack of hydrogen’). HydrOxy is the world’s BEST non-toxic anti-oxidant and anti-inflammatory; with anti-apoptotic (cell health) & cytoprotective (cell protective) properties.

HydrOxy (as a gas) can be:
* Directly Breathed (while sleeping, relaxing, etc.)
* Spot applied or Bagged, (to the skin)

Since 1995, copious empirical and anecdotal evidence of the efficacy of HydrOxy has been reported; mostly by people who already had electrolyzers and were trying ANYTHING to achieve better health.
The amazing results these people reported finally convinced some scientists to study hydrogen for health starting about 2005, resulting (as of 2017) in over 600 studies of over 170 ailments… ALL of which prove HydrOxy supplementation WORKS fantastically WELL!

Further, there are NO negative side effects! In every case, there are only positive health results.

In addition to hydrogen, HydrOxy also contains oxygen and ExW. HydrOxy has ALL the benefits of hydrogen PLUS is super-charged with nutrients & additional energy no other solution provides.

Two of many Safety Features of AquaCure:
The AquaCure machine has gas volume adjustability Why? Because, for most protocols, MORE hydrogen is better… the EXCEPTION is inhaling. When inhaling hydrogen you MUST keep the percentage of hydrogen in the intake breath UNDER 4% or it is EXPLOSIVE. For maximum therapeutic benefit you must inhale.
Most electrolyzer manufacturers don't mention this safety issue because they do NOT have gas volume adjustability.

AquaCure also has two different over-pressure safety features. Why? Because when water is made into HydrOxy, it expands 1800 times in volume, which (in an enclosed space) creates pressure. If the pressure rises too high, HydrOxy will selfexplode. The AquaCure is specifically designed to prevent or release excessive pressure. Most electrolyzer manufactures do not have pressure
controls or allow excessive pressure (>2psi) before shutoff.

AquaCure has MANY features for safety and convenience, setting the gold standard for the best of HydrOxy for Health technologies.

Use this resource for dozens of pier reviewed studies on the beneficial effects of HydrOxy gas and hydrogen gas
https://www.molecularhydrogeninstitute.com/

We are offering unlimited HydrOxy sessions at Sedona Soul Sisters Suite 112 for $200 per month.
Text Ed (928) 202-8244 or use form below with inquires and to set up the recurring monthly billing.
You’ll be sent a coupon code to use when you schedule your sessions online. Cancel any time.

Interested in purchasing an AquaCure?
Click the link below and use Coupon Code RozReynolds and SAVE $250.00
https://eagle-research.com/product/ac50/

We can’t make any claims of the efficacy of using HydrOxy to prevent and heal disease because of medical legalities and because every body is different (results will vary).

The statements contained herein have not been evaluated by the Food and Drug Administration.
Products discussed are not intended to diagnose, treat, cure or prevent disease, but have been proven useful for health and life extension. Consult with your licensed health care professional. Results may vary.